The Evolutions of Political Parties: Studying the Founders, Part III 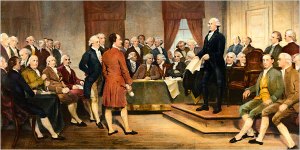 This is the third in a series analyzing historian Richard Hofstadter’s 1969 book, The Idea of a Party System. During a period when progressives’ frustration with the Democratic Party seeks constructive resolution, it is worth looking at the historical evolution of parties under the leadership of the Founders, whose very fears about political parties quickly became reality.

In Parts I and II we looked at the Founders’ disdain for political parties and factions, why Madison and others believed their influence could be mitigated, and how the French Revolution created the first partisan crisis of the young republic.  Now we turn our attention to John Adams, who could not claim President Washington’s pretense of non-partisan governance, though that hue by the end of his second term.

The behavior of the Federalist Party in the late 1790s eerily foreshadowed the Bush-era Republicans.  As tensions mounted with France, and the Anglophiles that ran the Federalist Party ratcheted up hysteria over France’s many diplomatic blunders, hoping to turn the American public sharply against the French, and, in turn, against the Republican Party.   The notorious Alien and Sedition Acts, which passed Congress narrowly (44-41) in 1798:

“{W}as vague enough to make a man criminally liable for almost any criticism of the government or its leading officers or anyeffort to combine for such a purpose…It drew no definable distinction between criticism and defamation, opposition and subversion”(p.107).

Hofstadter has praised the innovation of the Founding Fathers for creating the first legitimate political opposition under a republican framework, but he acknowledges that the Sedition Act was a major threat to its development.   Federalists hoped to cow Republican dissent by criminalizing their pro-French rhetoric.  It is a testament to President Adams that he was able to buck the “High Federalists”, who agitated feverishly for war, and ultimately decide against it, believing that the United States was too fragile a country to launch a costly war with its populace so bitterly divided.

Meanwhile, morale was down in the Republican camp, even as they continued to make gains in Congressional elections throughout the 1790s.  Jefferson encouraged his party to look past the election of Adams to the presidency, and bear with this Constitutional experiment, even as some of his peers speculated on secession:

“{I}n every free and deliberating society, there must, from the nature of man, be opposite parties, and violent dissensions and discords; and one of these, for the most part, must prevail over the other for a longer or shorter period of time.  Perhaps this party division is necessary to induce each to watch and relate to the people the proceedings of the other”(p.115).

For those of us reeling from the 2010 midterms, or indeed, for Republicans who were stunned by their repudiation in 2008, Jefferson’s passage should remind us all that in a democracy the side one supports will inherently lose the trust of the people in time, for any other result would be an indictment of the democracy’s vibrancy.   It is the responsibility of the party to bring the inadequacies of its opponents to light, and sell the people on why governing in an alternative manner would be preferable to their interests.

“A little patience and we shall see the reign of witches pass over, their spells dissolved, and the people recovering their true sight, restoring their government to its true principles…If the game runs against us sometimes at home, we must have patience until the luck turns, and then we shall have an opportunity of winning back the PRINCIPLES we have lost.  For this is a game where the principles are the stake”(p.117).

Folks, even in these times, the reign of witches will pass over, and their spells will dissolve.

For progressives who share my optimism about emerging demographic trends, including the socially liberal inclinations of the internet generation, the growing number of Hispanic voters and the passage of fundamentalism’s high-water mark, Jefferson had similar, and ultimately correct, assumptions about demographics in his own time.   He admonished Republicans to put away thoughts of secession or violence, and to stick with the democratic experiment.

Meanwhile, President Adams was finding out the lesson George W. Bush never had to- that a public’s appetite for war is easily lost by an accompanying tax increase.   The Republicans seized on this issue, and Adams, even as he had avoided war, was hammered over his party’s proposal for a burdensome war tax.  It soon became evident that the Republicans were cruising to electoral victory in 1800.

Now the Republicans, who had suffered such persecution as the minority party, would have the chance to govern.  But, as Hofstadter explains:
“{E}ven their  own experience as an opposition, however educative, had not fully reconciled them to the necessity of an opposition…”
Their own war to wipe out the Federalist Party for good was on the march.